Mural Art
The artist's work is currently not available in your region. Please select a different region

Ron English is known as "The Godfather of Street Art". One of the most prolific and recognizable artists alive, he is credited with graffiti's transition from a sub-cultural form of popular expression to the decorative, narrative murals seen today.

Amongst Ron's innovations is "culture jamming", the act of modifying or hijacking advertising billboards. For instance, Camel cigarette hoardings find brand mascot Joe Camel replaced with Ron's creations The Cancer Kids painted in the same style. His detailed, prolific oil painting skills are credited to his early background as an art reproducer.

English coined the term POPaganda to describe his signature mash-up of high and low cultural touchstones, from superhero mythology to totems of art history, populated with his vast and constantly growing arsenal of original characters. These include MC Supersized, the obese fast-food mascot featured in Morgan Spurlock's documentary Supersize Me, and Abraham Obama, the fusion of America's 16th and 44th Presidents, an image widely discussed in the media as directly impacting the 2008 election.

Picasso's giant painting Guernica is a regular inspiration, and in 2006 Ron painted an interpretation even larger than the original at the Station Museum in Houston, USA. This piece, entitled Grade School Guernica, Ron reproduced as a print edition. Another homage, Graveyard Guernica appeared in Ron's 2011 solo exhibition Skin Deep at Lazarides Rathbone. In 2007 Ron painted Palestine's West Wall alongside fellow street artists Banksy and Swoon.

He has provided LP artwork for rockers Slash and The Dandy Warhols, plus designed a vinyl toy line Dum English with RnB singer Chris Brown. In 2012 Ron English appeared as himself on The Simpsons cartoon, as Bart's graffiti mentor in the episode Exit Through the Kwik-E Mart. 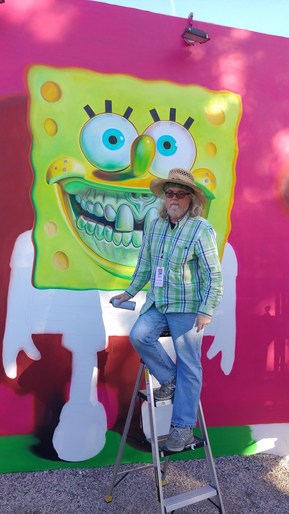