Mural Art
The artist's work is currently not available in your region. Please select a different region

Nuria Mora’s work is difficult to quantify within a single category of artistic creation. She has been a pioneer of the post-graffiti movement and is most known for her imaginative street productions. Nuria aims to create a dynamic dialogue between the public space, the diverse communities within the cities and her audience. Her work, described as “a silent sensitive poetry,”  poses a contrast to the bustling urban environments from which they sprawl. She carefully considers space, place and neighborhood culture, synthesizing them through an abstract lens in order to produce “a place for free thinking”.

Nuria’s work extend beyonds the street as she has collaborated with numerous galleries and international museums; including the Tate Modern, Joan Miró Foundation and Le Pilori. While her external creations evolve from the medium of the street (with its copious energy and spontaneity), her method for indoor exhibitions is slightly different. For these, she utilizes instillations that include everything from murals to video. Regardless of the setting, there are key stylistic threads, such as clever manipulation of geometric and organic shapes, that connects her work. In an external project this could include repurposing “street furniture” in a thoughtful and un-invasive way. Indoors, regardless of particular medium, she is carful to connect her work to the the real world outside of a specific ‘place’. In both cases her goal is to impart a new appreciation for the space around us to her audience. 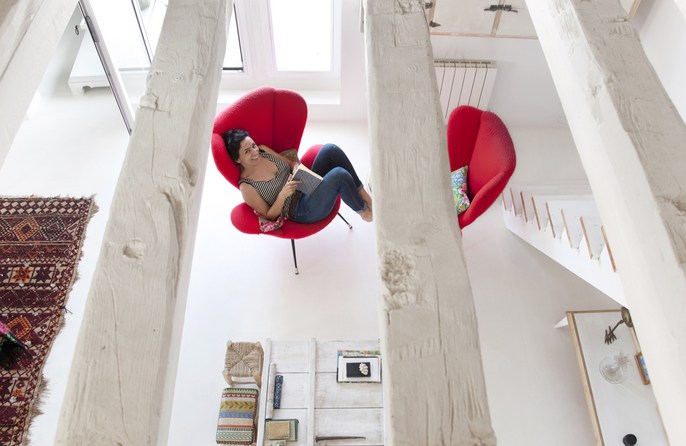